This is Section 3.1 of the Laser Optics Resource Guide.

Lasers are often classified by the gain medium used for light amplification. Common gain media types are gas, semiconductor (diode), and solid state. The key parameters of laser systems can be found in our Key Parameters of a Laser System application note.

Figure 1 shows 23 of the most common lasers and their wavelengths, modes of operation, and typical gain media. Gas lasers, such as helium neon (HeNe), are often used for metrology applications due to their high beam quality and long coherence length. Other types of gas lasers, such as carbon dioxide (CO2) lasers, are frequently used for materials processing because they can reach exceptionally high average powers.

Diode lasers contain a semiconductor p-n junction as the gain medium. They tend to have the highest power-to-cost ratio and benefit from high power conversion efficiency, high quantum efficiency, and a wide range of available wavelengths. Diode lasers are utilized in many applications including telecommunication, materials processing, bar code scanning, medical lasers, and LIDAR systems.

Solid state lasers utilize crystals or glass materials doped with transition metal or rare earth ions. They are often utilized for high power applications, such as material processing and medical lasers, because they can reach some of the highest peak powers out of all commercially available lasers.3 However, it is harder to cool solid state gain media, which limits repetition rate and average power.

Two special cases of solid state lasers are quantum cascade lasers (QCLs) and interband cascade lasers (ICLs). QCLs are tunable, semiconductor, mid-IR lasers that operate through intersubband transitions in alternating layers of thin semiconductor layers, or “wells”. Intersubband transitions are excitations between quantized energy states within the conduction band (Figure 2). Because of the extremely small size of the wells, quantum effects take over and the emission wavelength shifts as a function of well thickness. QCLs can produce high power at long wavelengths through the combination of both quantum and cascade effects. Most commercially-available QCLs tend to have wavelengths around 4-11μm, but the extremes of commercially available QCLs have wavelengths ranging from 2.63-150μm.4,5,6

ICLs are similar to QCLs in that they use layered semiconductor structures and quantum wells for mid-IR lasing, but photons are generated through interband rather than intrasubband transitions (Figure 2). They are able to operate with lower input powers than QCLs.

Figure 2: Comparison of (a) interband and (b) intersubband transitions in a cascade laser

Fiber lasers are a special type of solid state laser which use an optical fiber doped with rare earth ions as the gain medium. They are optimal for creating very fine features in highly precise machining and medical applications because they contain a high average power in a single optical mode with high beam quality.

Thin-disk lasers are another special type of solid state laser in which the gain medium is a very thin disk of solid material. They are a balance between fiber lasers and other solid state lasers in that they achieve a high peak power and gain while utilizing a geometry that makes them easier to cool, improving their repetition rate and average power. However, they require complex system designs and therefore cost more than other laser types. 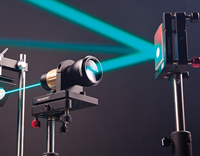